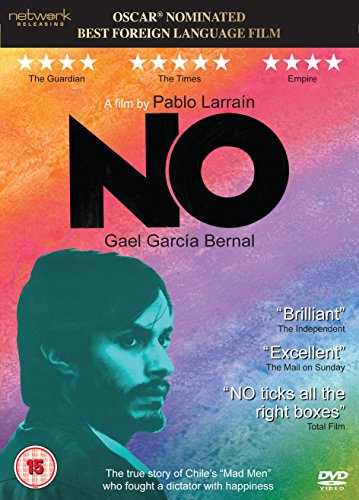 It’s easy to be cynical about mass marketing, but the glad tidings and inviting imagery of consumer advertising play a central role in No--Pablo Larraín’s deadpan satire about the TV campaign that toppled Chilean dictator Augusto Pinochet. Filmed on vintage ‘80s cameras for an authentically analogue feel, No dramatizes the 1988 referendum that famously backfired on Pinochet as a scheme to legitimate his 1973 military takeover. The hero of the story is free market economics, and particularly the tribe of slick young ad execs making hay in the springtime of Chile’s market-oriented reforms. Rene Saavedra (Gael Garcia Bernal) is a high-achieving member of this newly seeded media set--a globalized hipster with a strong track record of MTV-style ads, hated by his activist ex-wife and unmoved by the new political solidarity forming on the Chilean left. He’s invited by Chile's opposition coalition to produce the ‘No’ campaign, a series of anti-Pinochet adverts to be broadcast during referendum month on one of the state-owned TV stations. Saavedra accepts, but gives the campaign’s studenty agitprop a marketing facelift, and succeeds, to the mortification of his lefty fellow campaigners, in stirring an electorate resigned to a rigged ballot. For Saavedra, this is no more than business; democracy is another product to be flatteringly lit and marketed in the abstract and self-delighting language of big brand advertising. But for the Pinochet regime, it’s a title fight for the next eight-year term, and their response is the ‘Yes’ campaign: a televised portrait of a benevolent Pinochet, solidified on the ground by policies of intimidation, censorship and armed suppression. The final vote goes down to the wire, and No ends with scenes of a jubilant Chile waking up to a new democracy and, as Saavedra is rehired into his old firm, the beginnings of a consumer hangover. --Leo Batchelor