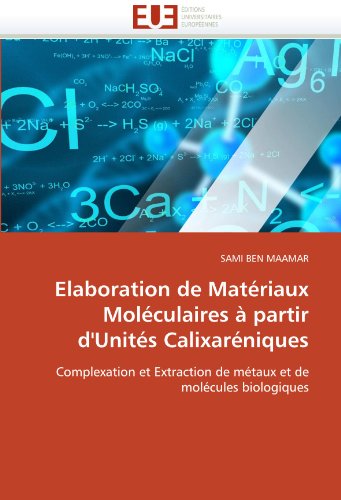 During this work of thesis, new calixarenes complexing selectively metal ions have been synthesized. After a bibliographic presentation, a calix[4]arene containing organosiloxane group has been grafted on a periodically mesoporous SBA-15. The multiple characterization techniques used indicate that the calix[4]arene derivative has been well-anchored on the surface of SBA-15 generating a new class of hybrid materials. This new hybrid material has been demonstrated to have highly selectivity towards several ions. The third part of this work, relates to the complexation properties of new thiacalix[4]arenes containing three amide groups towards heavy and transition metals. The substitution of the residual phenolic group with n- propyl chain, an ester or an amide group doesn’t modify the nature of the formed complexes except for mercury salts (I) and (II). In this case the triamide ligand is the only one to complex mercury (I) and doesn’t present any affinity with respect to mercury (II). The last objective of this work is the synthesis of new calixarenes copolymers. Two methods of grafting of monomers are described and several reactional pathways have been tested.


Sami Ben Maamar, born in 1975 in Tunisia, completed his PhD in2008 at the University Claude Bernard Lyon 1 (France). Since2009, he joined the University of Liège in Belgium as apost-doctoral researcher in the CERM under the supervision of ProfessorChristine Jérôme, where he works on biopolymer modification forbiomedical applications.